Skoda TVC — 10 REBELS and CAPA REBELS were cast as featured kids in this new advert for Skoda!

These 10 (plus 3 who couldn’t film due to been booked out to professional Christmas productions) went to their casting as groups of friends…and the casting director was so impressed with their natural rapport with each other that she cast a whopping 10 REBEL and CAPA REBELS! This group had a fab time filming and it was a first job for a few since joining the agency…so a special well-done goes to them! The 10 were: Madison Mersini, Sonny Cusworth, Lucy Peel, Ellis Kirk, Freddie Mulhall, Ben Baldwin, Harry Fox, Joel Gaskin, Kennadi Bodally & Olivia Tomlinson (plus Jake Littleton, Jack Baron & Boris Burnell-Anderson who could not film). 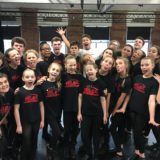